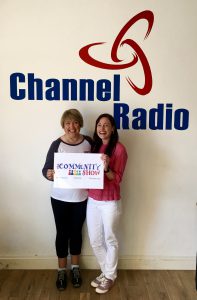 Broadcast on Thursday 18th August 2016.  We were joined in the studio by fearless fundraiser Trudi Bubb.  Trudi recently returned to dry land after competing in the Clipper Round the World Yacht Race which saw her sailing through good weather, storms with huge waves, even the Panama Canal with team UNICEF.  It was certainly not a tale of plain sailing that Trudi has to share with listeners but a gruelling adventure which exerted Trudi both mentally and physically.  While some of the original team dropped out along the way, Trudi reminded herself on a constant basis the reason why she was onboard, to raise money for the Golden Lion Children’s Trust in Sussex to send the children for a visit to Lapland to visit Father Christmas.

If you would like to help Trudi reach her fundraising goal of £20,000 for the charity, you can either make a donation to her JustGiving page or have some fun at the same time and come along to a charity fundraising dinner on Saturday 24 September at the Crowne Plaza Hotel in Crawley.  Further information and tickets can be obtained by clicking here, via email trudimbubb@gmail.com or by calling Huw on 07941 575 465.