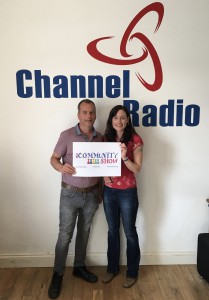 By far the biggest event organised by Ashford Charity Funds is their big charity match, now in its 9th year and taking place on Sunday 5th June at the Gallagher Stadium, home of Maidstone Football Club.  Money raised at this match will be split between Pilgrims Hospice and Cancer Research UK.  Listen to the show to hear what’s in store, find out which football legends and stars will be playing in the match and all the other entertainment you can expect on the day.  And there’s more but you can hear it from Gary!

To purchase tickets to the match and more, visit the Ashford Charity Funds ‘Shop‘ page on the website.  If you’d like to get in touch with Gary you can contact him on 07850 747 198, email gazzakirton@yahoo.com or follow him on Twitter @gazzakirton  or @kirtongk

We have a family ticket to give away to the BIG Charity Match taking place on Sunday 5th June 2016.  Just answer this simple question:

Q: Where is the BIG Charity Match being held?

Email your answers to: competitions@thecommunityshow.net AND INCLUDE your address (we will need to put your tickets in the post) and a contact phone number.  The winner will be announced on Thursday 2nd June LIVE ON AIR!  You have until 10:30am on that day to submit your entries.