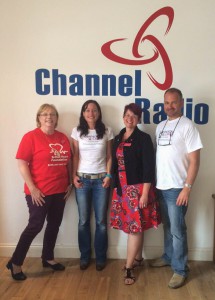 Broadcast on Thursday 16th July 2015.  Our studio guests were Joanne Howe and Kim Brophy, Fundraising Managers for the British Heart Foundation.  Cardiovascular Disease causes more than a quarter of all deaths in the UK and there are an estimated 7 million people living with it in the UK.  Listen to the show to find out more about the work of the BHF in Kent and nationally.  Joanne and Kim joined the BHF for very personal reasons and their roles as Fundraising Managers is much more than just a job for them both.  With no other funding coming in the organisation is reliant on the work of it’s Fundraising Managers, supporters and volunteers to raise the money needed to continue the vital work they do.

If you would like to get involved and support this great charity, Joanne and Kim would be delighted to hear from you.

The British Heart Foundation – Fight for every heartbeat! – www.bhf.org.uk | @TheBHF