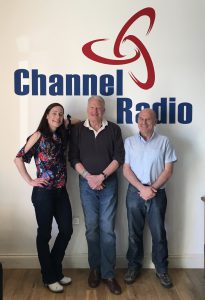 Broadcast on Thursday 6 April 2017.  We were joined in the studio by Chairman of the Chiddingstone Real Football Committee, Andrew Hutchinson.  Now in it’s fifth year, the match is played on Good Friday, has almost 100 players per side, hundreds of spectators with goals at the Rock Inn and Castle Inn pubs in Chiddingstone.  The course is two miles long and there are not really many rules…  Listen to the show to find out more about the game, why it’s held in Chiddingstone and what you can expect on the day.  Each year there are three charities supported making this a massive fundraiser – this year the charities are Demelza Hospice Care for Children, Kent, Surrey & Sussex Air Ambulance and Chiddingstone Causeway Village Hall redevelopment.

This year’s match will be held on Good Friday 14 April and starts at 2.30pm, lasting about 4 hours.  If you plan to visit then you’ll have to park and walk so bring some sturdy shoes.  There is also evening entertainment at the Rock Inn after the match and it really is a super day out.  Co-host Ken has played twice – will he playing again this year…?