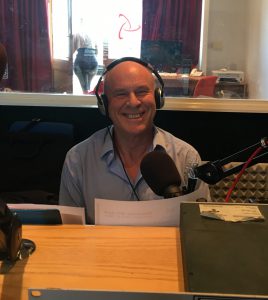 Broadcast on Thursday 9 March 2017.  Although the studio was empty of guests we had them lining up on the phone instead.  Our first interview was with Nicola Sutton of Split Second Events who is organising an awareness event James Bond style for Headway East Kent which is taking place on 18 March 2017 at the Kent County Cricket Ground in Canterbury.  Headway East Kent currently operate from a run down porta-cabin at the Kent and Canterbury Hospital and through this event they are hoping to raise much needed funds that will enable them to develop a new building to accommodate current and future plans.  A crowd funding page has also been set up so listen to the show to find out more.

We were also joined by Jason Steelman, Centre Manager at the Kent MS Therapy Centre to hear more about the extension in their opening hours and why this has made such a positive impact to those with MS in the Kent and surrounding areas.

Ken Tymms was again in the hot seat as co-host and we had a huge amount of shout out requests to get through.